Jodhpur gets its name from its founder, Rao Jodha, teh Rathode chieftain. The Rathodes are believed to belong to the dynasty of the sun god himself (Surya Vansha) which has produced scions such as Lord Rama and King Harishchandra. It is believed that the city came into being in 1459 A.D. Jodhpur has been an important trading center of Rajasthan even in ancient times and is currently the second largest city of the state. 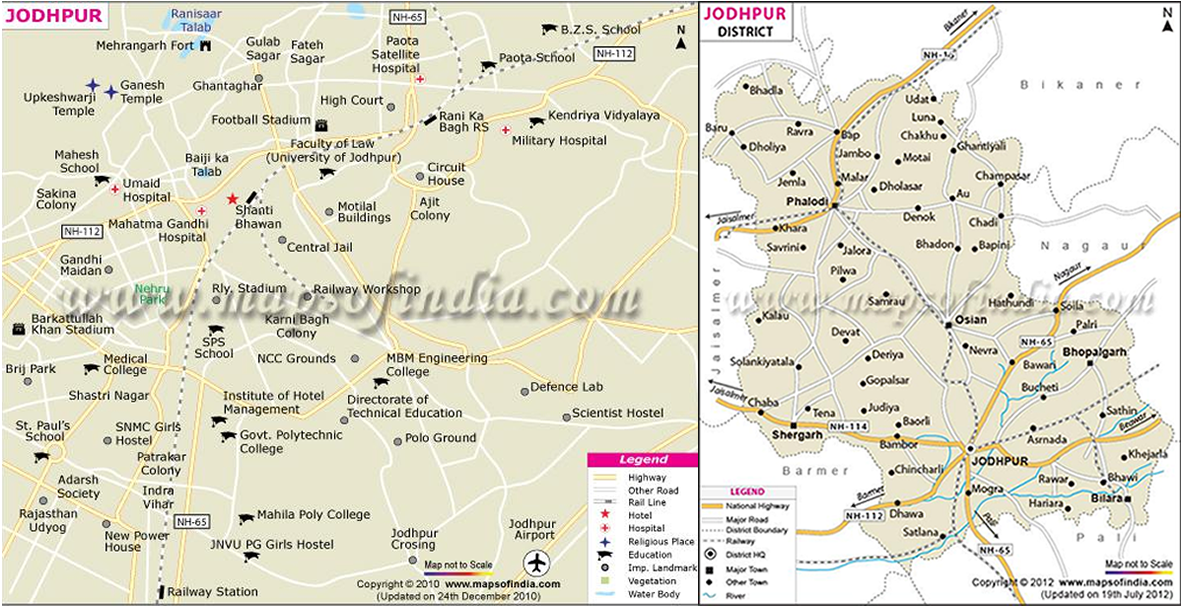 Jodhpur is the second largest city in the Indian state of Rajasthan. It is located 335 kilometres (208 mi) west from the state capital, Jaipur and 200 kilometres (124 mi) from the city of Ajmer. It was formerly the seat of a princely state of the same name, the capital of the kingdom known as Marwar. Jodhpur is a popular tourist destination, featuring many palaces, forts and temples, set in the stark landscape of the Thar desert.

The city is known as the "Sun City" for the bright, sunny weather it enjoys all year. It is also referred to as the "Blue City" due to the blue-painted houses around the Mehrangarh Fort. The old city circles the fort and is bounded by a wall with several gates. However, the city has expanded greatly outside the wall over the past several decades. Jodhpur lies near the geographic centre of Rajasthan state, which makes it a convenient base for travel in a region much frequented by tourists. Jodhpur is in the news recently for being one of the prime locations for the shoot of The Dark Knight Rises. The crew along with Christopher Nolan and Christian Bale spent months at Mehrangarh Fort, Jodhpur.

Rajasthan is a state known for its tradition and culture. The state is having its own history in the field of bravery as well as art and craft. The people of state very much fond of traditional rituals with vibrant and colorful festivals. Particularly Jodhpur is surrounded by districts such as Barmer, Jaisalmer, Bikaner, Jalore, Sirohi, Pali, Nagour. The whole covering this part is known as Marwar. Since immemorial the state of Rajasthan is practicing the weaving of cloth and decorating the textiles by various methods such as Ambriodry, Painting, Applica etc. Mostly the fabric produced in the western part of Rajasthan and work of its decoration is suited to local habitant of region. After agriculture and animal husbandry the people are doing in the villages weaving of textiles to meet the requirements of their residents. Most of the weavers in this regions doing Weaving on the pit loom with fly and throw shuttles . They are producing various fabrics for Jats , Rabaris, Rajputs, Jainies , Vishnois and the people living in the area. It has been observed that most of the weavers are belongs to Meghwal community in the profession of weaving. They are using mostly Cotton, Woolen, Yarns of coarser count for production of various textile fabrics. The count of Yarns is ranging from 2/20s -2/60s and indigenous woolen yarn. The fabric produced are Jatasari, Curta cloth and Blazer cloth with plain and twill weave. Apart from the above traditional weaving practices in the interior of the villages the Salavas is a place where Weavers are also weaving Darry fabrics for export market. The weavers of Salawas are using ply cotton yarn dyed with vat colours which ensures the fastness of dyed yarn. They are also manufacturing durry with camel hair and woolen yarn for production of durries not only for exports but also for domestic market. Infact the production of such durries almost practicing in every part of Rajasthan and popularly known as panjadari.

Jodhpur boasts of an airport, located a mere 5 km from the heart of the city. Regular flights connect Jodhpur airport with the major cities of India such as Jaipur, Mumbai, Kolkata and Delhi. Jodhpur is also a major railway junction and is well connected by the Indian Railways network to the rest of the state and country. A good number of RSTC buses and private luxury buses ply between Jodhpur and places such as Jaipur, Jaisalmer and Delhi.

HOW TO REACH IIHT, JODHPUR

Jodhpur is well connected by road, rail and air. Direct flights from Delhi, Mumbai are available on daily basis. No. of trains from all parts of India are also available along with State Transport Bus service from Delhi, Ahmadabad, etc. for Jodhpur. The campus of the Institute is nearly 18km away from the Airport, 12 km away from Jodhpur Railway station and 14km. away from Bus stand. For local transport Taxis /Auto Rickshaws/ Buses are available at Airport / Railway Station / Bus Stand.